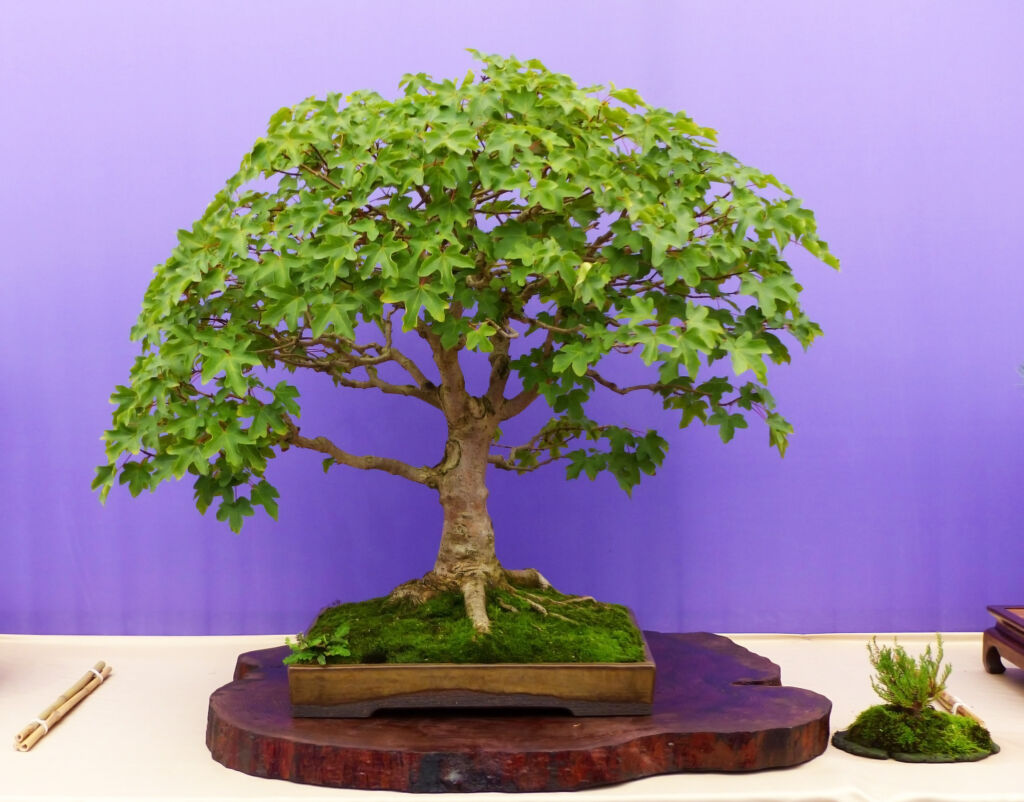 The Bonsai art form has been around for centuries. The trees grow in small containers and usually require a great deal of patience and some skill to create and maintain. Many different styles of bonsai exist, each with its own unique features. In this post, we’ll take a look at some of the most common bonsai styles, as well as some fascinating facts about them. We’ll also provide tips on how to care for your bonsai tree in order to keep it looking its best. So whether you’re a beginner or a seasoned pro, be sure to read on for everything you need to know about Bonsai Styles!

We know Bonsai trees grow as fascinating plants that add a touch of elegance and serenity to any setting. Bonsai styles vary, and each one has its own unique look and feel. In this blog post, we’ll discuss some of the most popular bonsai styles and provide some interesting facts about each one. We hope you enjoy learning about these beautiful plants! 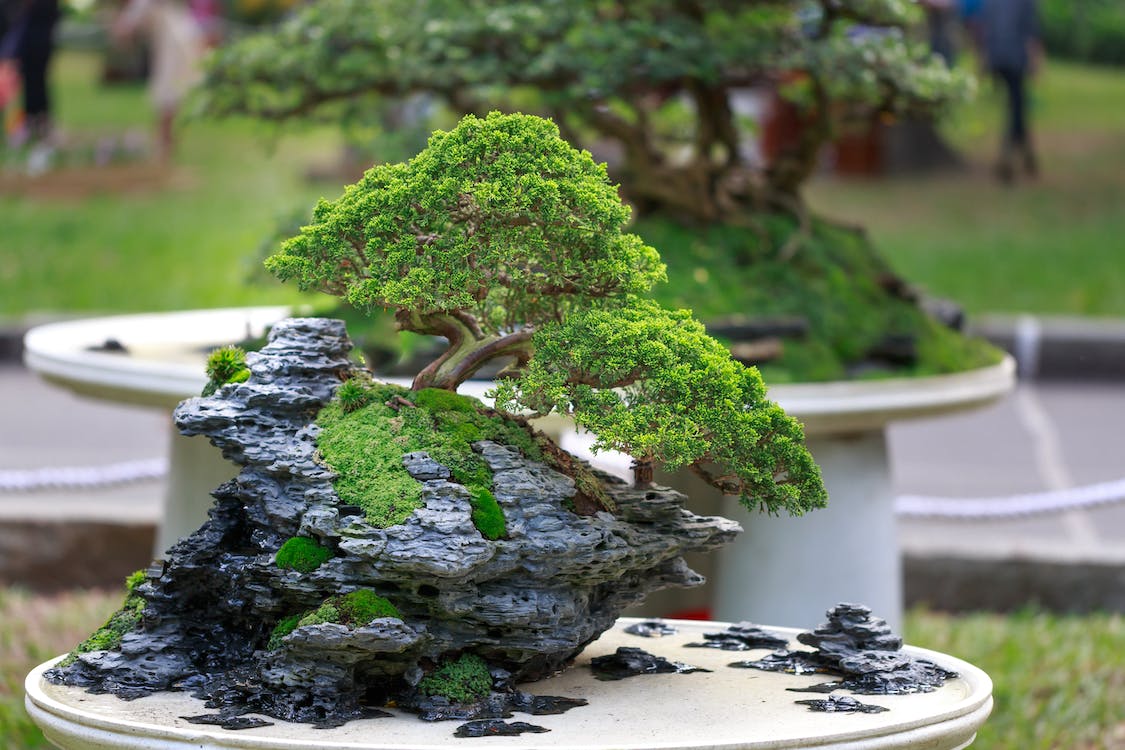 In fact, the Japanese recognize over 100 styles of Bonsai. However, most experts these into 5 basic styles to be essential.

From there, today we describe a total of 12, including the 5 basic. Keep in mind this list could well include many others, too.

Quite common among Bonsai trees, the Chokkan features a formal upright trunk. Additionally, the trunk is clearly visible as it grows upright, much as a cultured tree in your backyard.

The trunk grows wider at the base but tapers to a thinner diameter toward the top. You notice that the branches start after about the first 1/4 up from the base. The top contains a single branch.

Many enjoy the simplicity of this style and consider it a small version of landscaping trees.

Most common in nature, the Moyogi looks quite similar to the Chokkan but with a slight difference. The trunk is still upright but is twisted into an “S” form. However, the tapering of the trunk still shows as quite easy to see. 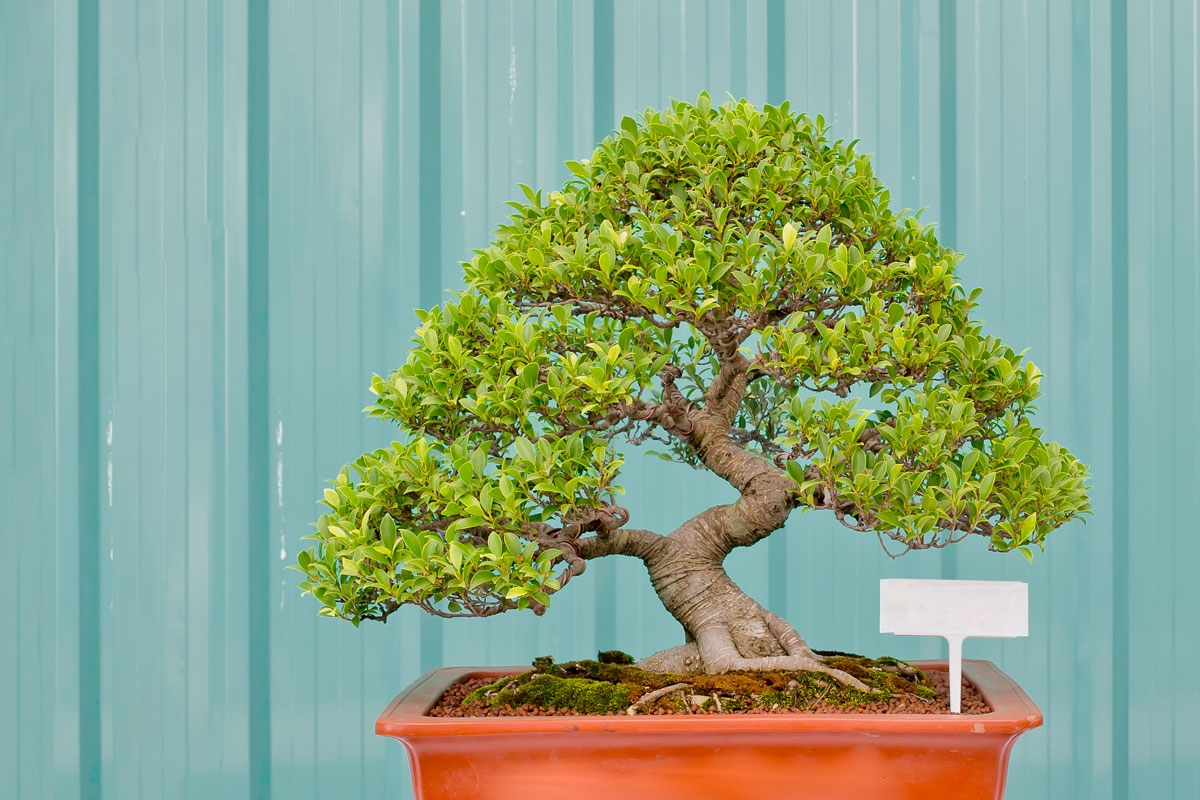 Best suited for deciduous trees, the Hokidachi sports a very straight, upright trunk with branches starting about 1/3 of the way up the trunk. Ideally, it displays many branches going in all different directions for an artistic appeal.

While Hokidachi looks beautiful year-round, it truly shows its artistic form in the fall and winter when the leaves fall. 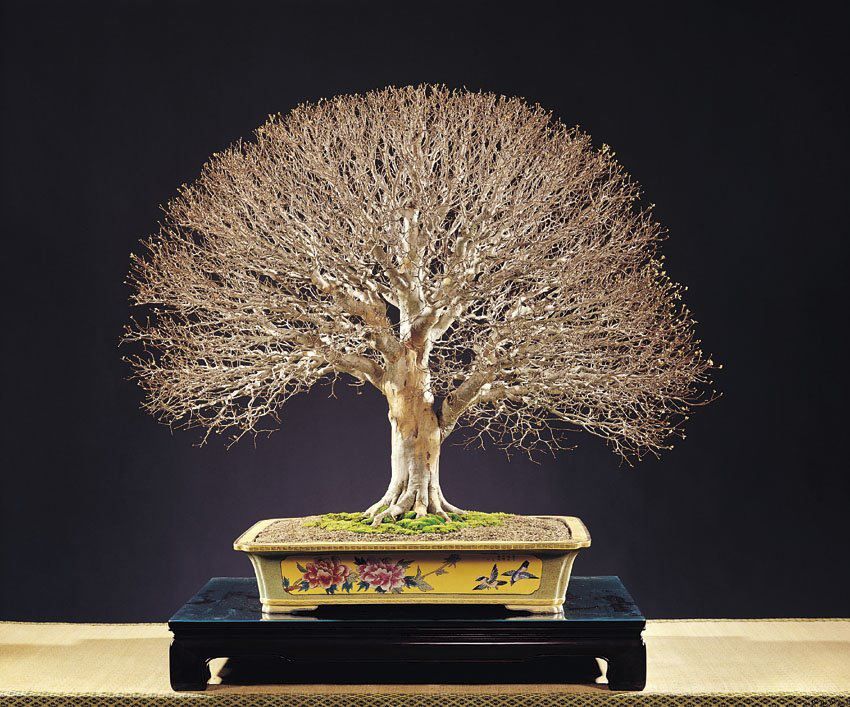 Have you watched trees on a windy day as the wind sweeps the branches aside? The Shakan Bonsai forms in a similar manner to reflect that windswept effect. Some consider that it resembles a tree that grows in too shady a place, causing it to stretch its branches toward the sun. Either way, the Shaken style delivers quite the effect.

It usually grows at about a 60-80 degree angle to the horizon.  The first branches grow in the opposite direction of the leaning side.

Shaken sports a very well-developed root system on one side which provides good support. However, on the side where the tree leans, the roots show much less development. 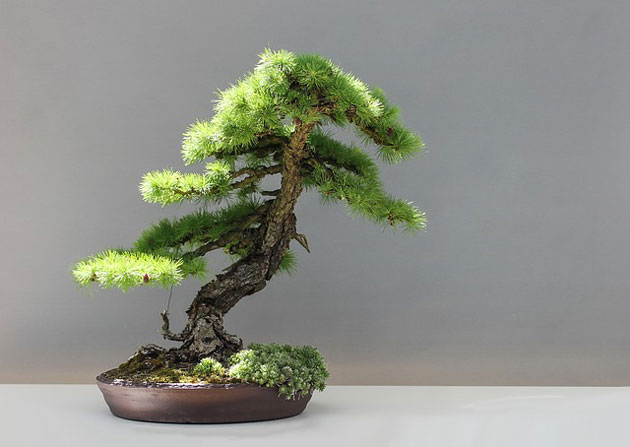 Some trees naturally grow on a steep cliff, bending downward as they grow. The Kengai, also known as the Cascade Style, forms in such a manner. This style creates some difficulty for the artist as trees tend to grow upward, with the roots growing downward due to tropisms.

Many see this as the resemblance to the effect of falling rocks or snow off a cliff. Indeed, when properly done, the Cascade effect of Kengai does bring that illusion.

Kengai generally needs to reside in taller pots to provide extra stability for the cascading effect.

The design forms by first allowing the tree to grow upwards for a short distance, then bending it downwards. The branches alternate on the left and right sides. 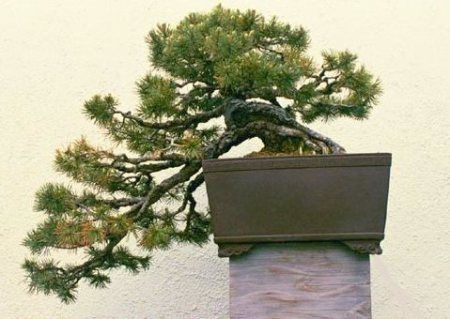 The Han-Kengai, also known as a semi-cascade style, shows a slighter cascade effect than the Kengai style. It forms similar to the Kengai. However, the trunk always stays above the bottom level of the pot. While this creates more balance, it still requires a taller pot. 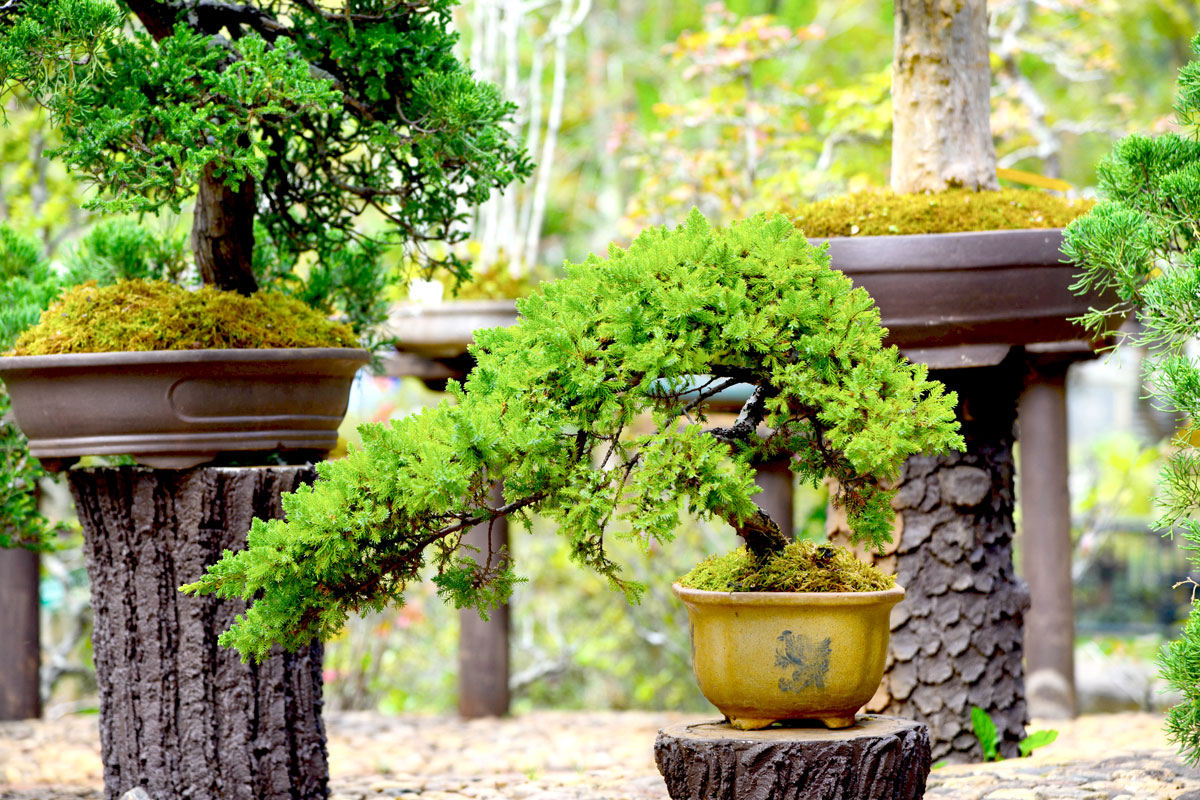 In a thickly planted grove or a dense forest, trees often stretch quite tall before branching out. This happens as they strive to reach for sunlight. The Bunjingi Bonsai, also known as Literati Style Bonsai resembles that same impression.

You notice no branches at the lower ends of the tree. They have a tough, almost rugged look about them.

The Bunjingi Bonsai symbolizes the struggle for existence. 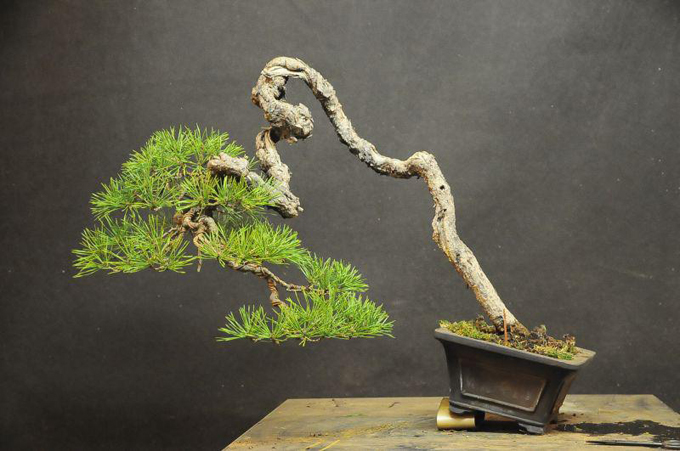 Slightly more dramatic than the Shaken or Slanted Form of Bonsai, the Fukinagashi offers a bit more flair. It leans all to one side as if being pushed by a strong wind. 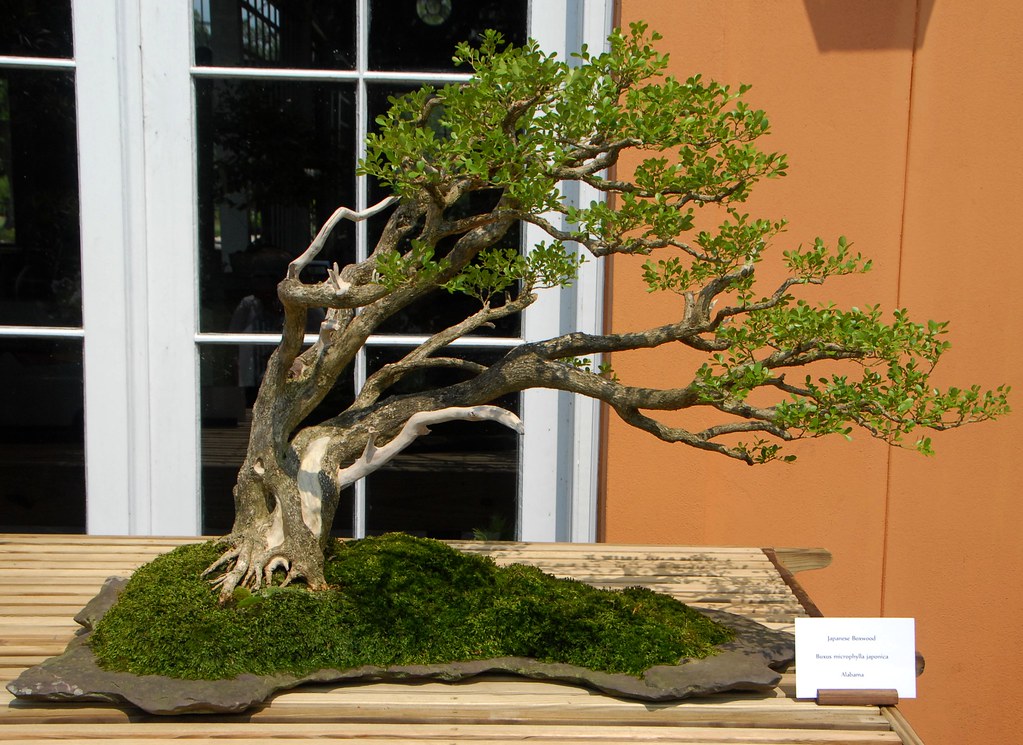 While less popular than some other forms, the Sokan or Double Trunk style does have its fans.

As the name implies, Sokan begins with two main trucks which grow from the same root system. Although they might seem like twins, the trunks often have different diameters and may not look identical. In fact, usually the thicker trunk grows almost upright while the thinner one appears a bit slanted.

However, as they grow, both share a common canopy of leaves. 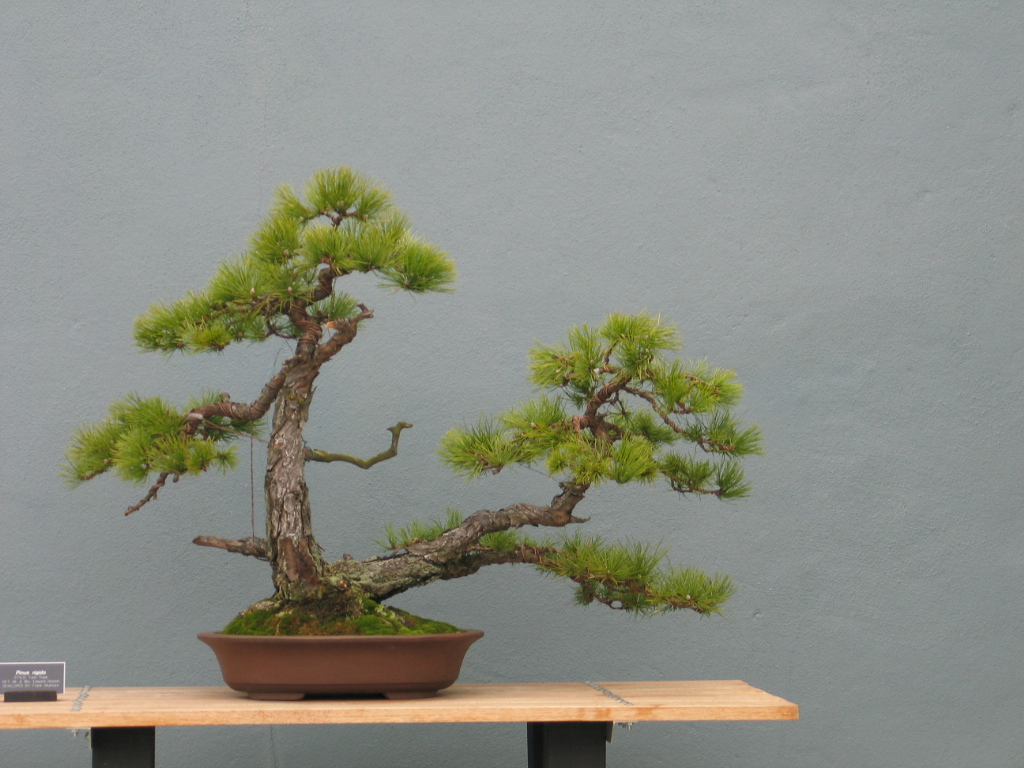 The Kabudachi, also known as Multi trunk Style Bonsai, grows similar to the Sokan except that it possesses 3 or more trunks. Just as with Sokan, they all share a single root system and show different diameters of the trunk. 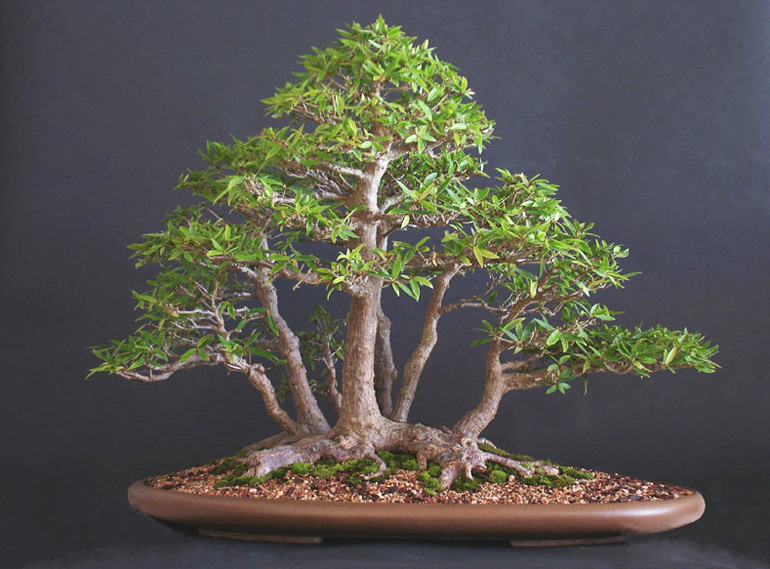 At first glance, you might think Yose-ue is actually a Kabudachi Style. However, a closer look shows that the trees actually grow from different root systems, giving them a forest-like appearance. Since they are truly separate, though close together, the trunks show individuality, too.

Usually, the grower plants the more mature larger trees toward the middle, then adds smaller trees on the side. Viewers will note a pattern designed by the grower. 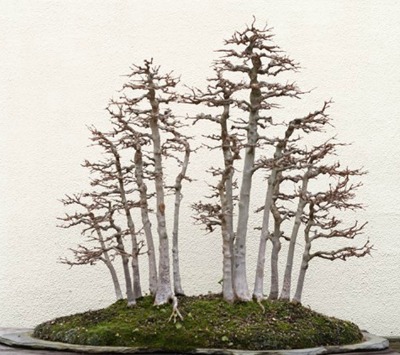 Sekijoju or Bonsai On Rocks:

Many times in nature trees seed onto rocky areas and grow as best they can. It roots through cracks and holes, searching for needed nutrients. Often moss or other materials cover the roots which help protect them from sunlight. If they encounter any obstacles, they tend to grow around and over wherever possible.

The Sekijoju represents this effect. As such, the initial design creates a rocky effect. Obstacles might be in place, too. Bonsai growers need to provide some care for the roots, which might include adding a texture such as moss. 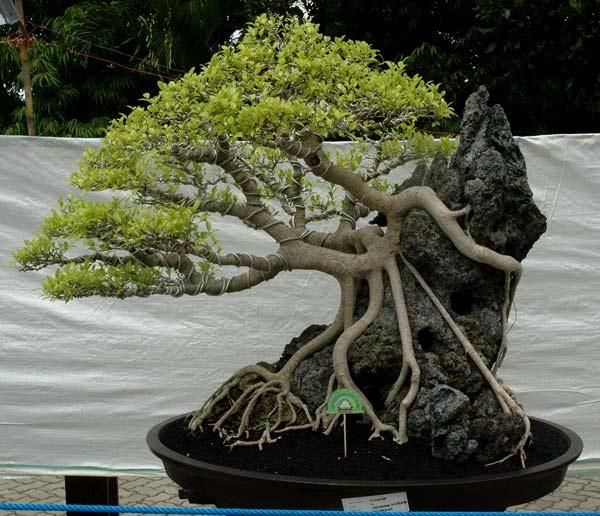 And a bonus: the Weeping Style

Many people adore the Weeping Willow and Weeping Cherry trees nature grows. We usually find them in wet areas such as near ponds and creeks.

Carefully styled after weeping trees such as the Weeping Willow, this form requires the branches to be drained to first grow upward, then bend downward for the weeping effect. 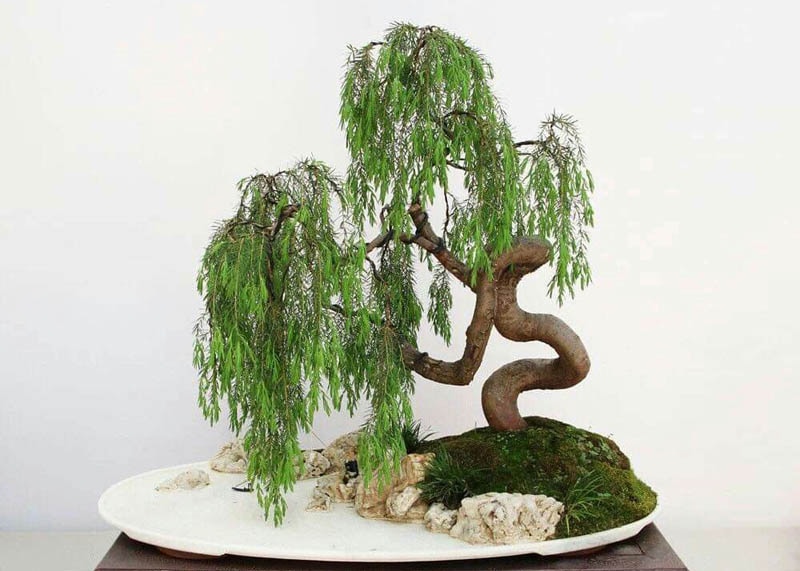 So, what have we learned about the different bonsai styles? First and foremost, there is no one right way to create a beautiful bonsai. Each form has its own unique set of challenges and rewards, so it’s up to you as the grower to decide which style best suits your individual talents and interests.

We hope you’ve enjoyed this introduction to the fascinating world of bonsai styles. As with any art form, there is always more to learn about the history and techniques involved in creating beautiful bonsai trees. We encourage you to explore further and check out our other Bonsai articles.  We hope you’ve found this post both informative and inspiring – please feel free to leave any comments or questions below! 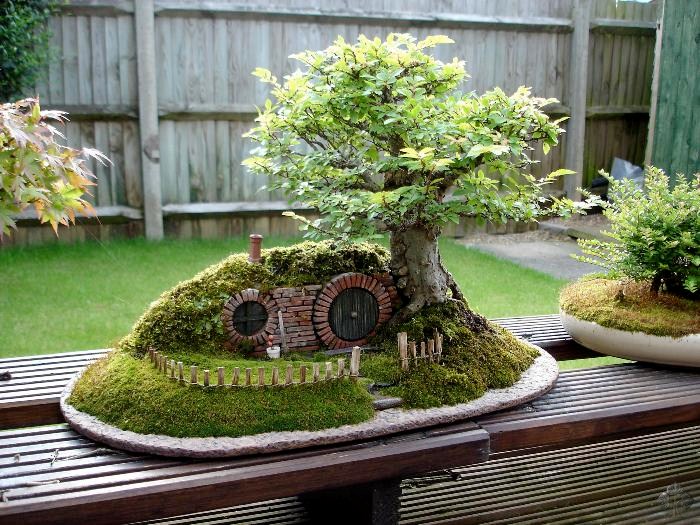 What do Bonsai Trees Symbolize? 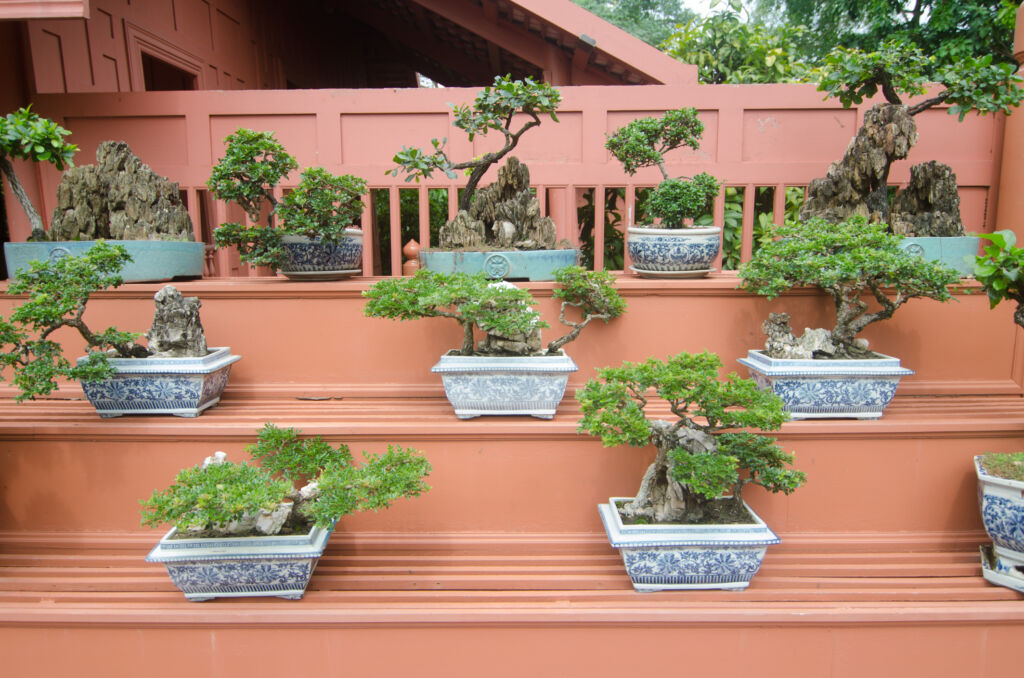 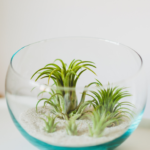 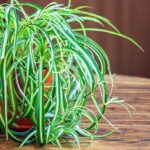 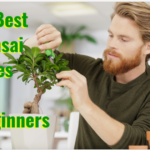 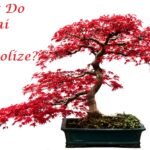 What Do Bonsai Trees Symbolize?